This is a very important video, especially since the 2016 election is upon us and neither candidate has PROPERLY addressed African American issues. And now President Obama has asked us to trust in him and vote for the candidaate he has chosen to be the next President of the United States. So the “Woman To Woman” group is asking President Obama to solidify his trust in the African American people by giving them three things

which is not a hell of a lot to ask for considering the years of systematic racial inequality African Americans have endured.

But there is also a really telling element in this Woman-To-Woman video. They remind the African American people, a higher percentage of African Americans than whites voted in the presidential election for the first time in history, during the election between President Obama and nominee Mitt Romney. Now pay close attention to this statistic, because this alone dispels the myth that African Americans are only 12-15 percent of the American population. So could this be the reason for the casual killings of African Americans, under the term “Justifiable Homicide”? 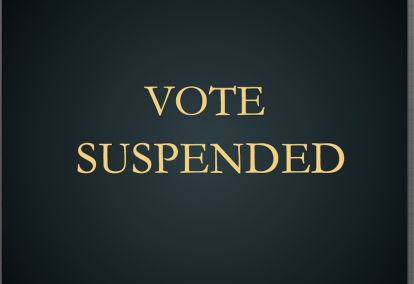 They also ask that you CHANGE YOUR PROFILE PICTURE on  your social media pages to the black and gold  “VOTE SUSPEMDED” poster to show our solitarity, while we wait to  hear from President Obama. So watch the video. It’s worth it.

34 thoughts on “A MESSAGE TO THE AMERICAN NEGRO. SUSPEND YOUR VOTE!!!”

This site uses Akismet to reduce spam. Learn how your comment data is processed.

< Previous Next >
+ Add your own event Eventbrite

FIND ALL MY PODCASTS ON ANCHOR

Clan Mama Dee is an ascendant of the Choctaw Nation. She is a sociologist, an educated Writer, podcaster and videographer. The call-to-action campaigns is designed to bring awareness and promote unity under our true identity of the originals of American. The mission is to raise a platform of social awareness and giving the opportunity for those who want to unify to get involved. For more information about the campaigns and social movements reach out to her online or on any of the provided social links.